This is a subtopic of Large-Scale Learning.

Kernel machines are often associated with dual techniques that implement very large parameter spaces at the expense of scalability in the number of examples. However, kernel machines can scale nicely by cleverly approximating the conventional optimization problem solved during learning. These ideas are not specific to kernel machines and are being actively explored in the context of other learning algorithms. Starting with relatively well understood kernel machines has provided a sounder way to assess their impact on the statistical efficiency of learning algorithms. 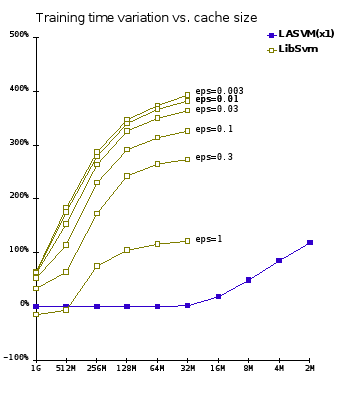 In the case of a Support Vector Machines, the obvious choice consists of summarizing the examples using the Support Vectors. We designed a sequence of online SVM algorithms, the Huller, LaSVM, and LaRank. These algorithms reach generalization peformances comparable to the batch SVMs after a single pass over the training examples.

Most training examples will only be seen once by the learning algorithm. This property considerably reduces the memory requirements of kernel algorithms. As a consequence these algorithms scale to datasets containing millions of examples. 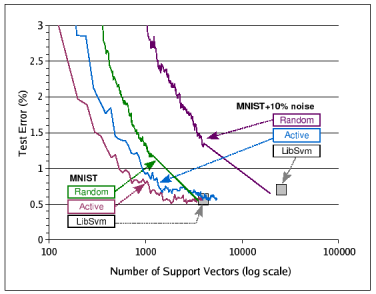 Since we can summarize the past training examples using a well chosen subset, we can also consider selecting each new training examples. Instead of performing a sequential pass over the training set, we can actively pick informative training examples, that is, examples located in the vicinity of the decision boundary. This active learning strategy solves two problems that usually plague support vector machines.

There is a tension between the challenges of large-scale datasets and the relative slowness of the standard kernel machines algorithms. To make them fast, one needs to bring new ideas. This was the starting idea of the NIPS 2005 workshop on Large-Scale Kernel Machines, organized by Olivier Chapelle, Dennis DeCoste, Jason Weston, and myself.

We were not disappointed. The Large-Scale Kernel Machines book progresses from well-understood techniques to increasingly controversial topics. For instance, the last chapter considers problems that animals perform effortlessly, such as perception and control, and argue that local kernel representations are inefficient for these problems. Meanwhile, this argument might not apply to other relevant tasks, such as mining transaction logs. Are these classes of problems different enough to justify distinct scientiﬁc approaches?