Empirical Analysis of the Hessian of Over-Parametrized Neural Networks 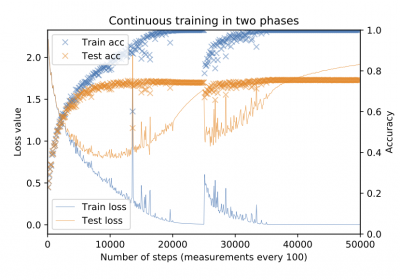 We study the properties of common loss surfaces through their Hessian matrix. In particular, in the context of deep learning, we empirically show that the spectrum of the Hessian is composed of two parts: (1) the bulk centered near zero, (2) and outliers away from the bulk. We present numerical evidence and mathematical justifications to the following conjectures laid out by Sagun et al. (2016): Fixing data, increasing the number of parameters merely scales the bulk of the spectrum; fixing the dimension and changing the data (for instance adding more clusters or making the data less separable) only affects the outliers. We believe that our observations have striking implications for non-convex optimization in high dimensions. First, the flatness of such landscapes (which can be measured by the singularity of the Hessian) implies that classical notions of basins of attraction may be quite misleading. And that the discussion of wide/narrow basins may be in need of a new perspective around over-parametrization and redundancy that are able to create large connected components at the bottom of the landscape. Second, the dependence of a small number of large eigenvalues to the data distribution can be linked to the spectrum of the covariance matrix of gradients of model outputs. With this in mind, we may reevaluate the connections within the data-architecturealgorithm framework of a model, hoping that it would shed light on the geometry of high-dimensional and non-convex spaces in modern applications. In particular, we present a case that links the two observations: small and large batch gradient descent appear to converge to different basins of attraction but we show that they are in fact connected through their flat region and so belong to the same basin.